Earlier this year, the Energy Justice for North Carolina coalition published the Monopoly Money report detailing Duke Energy’s campaign contributions to all members of the state Senate and House of Representatives in calendar year 2018. That report was intended to shine a light on the influence of those donations over legislator support for Senate Bill 559.

On July 19, 2019, we released follow-up analysis that goes deeper in the investigation into the electric monopoly’s political influence in North Carolina by examining a full ten years of campaign contributions from Duke Energy’s Political Action Committee (PAC) and the utility’s top executives. 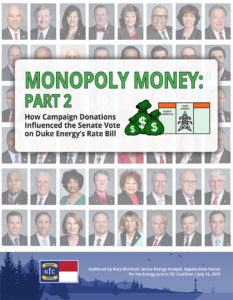 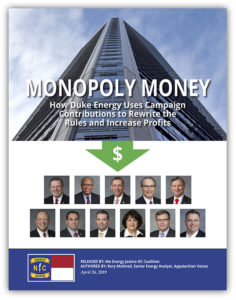