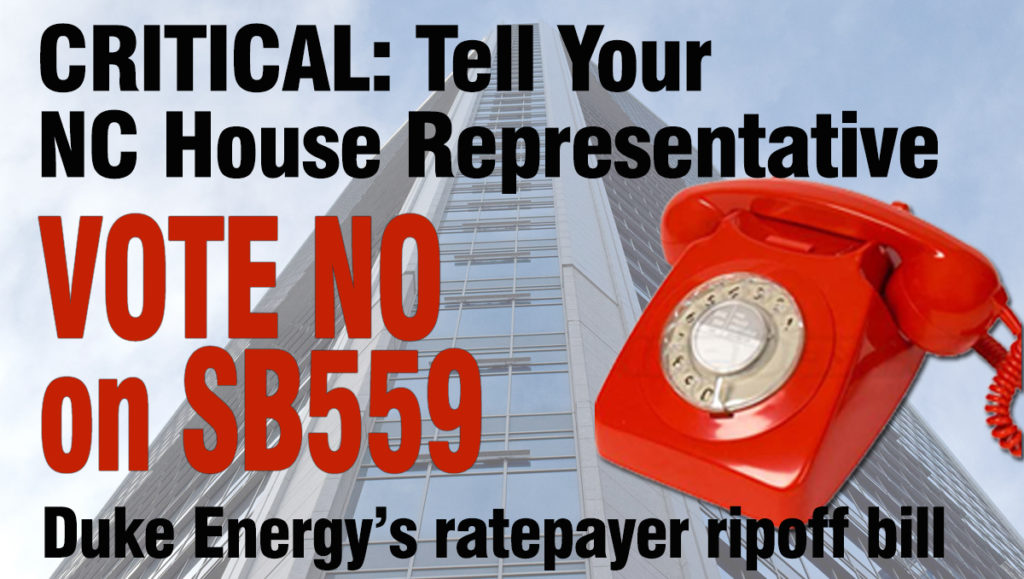 Duke Energy is trying to sneak its ratepayer ripoff bill in the final days of the N.C. legislative session. Help us stop them by calling your legislator now! The bill is scheduled to be voted on as early as 2 p.m. TODAY (Tuesday 8/20). CALL YOUR STATE REPRESENTATIVE NOW and tell them to VOTE NO to SB559.

–> Look up your NC legislator now

As a concerned constituent, I urge you to vote NO on SB 559 which would allow Duke Energy to raise rates more easily, with less oversight. This bill could also put Duke’s ratepayers on the hook for coal ash cleanup costs and its flawed $13 billion grid “modernization” policy, all with little transparency or accountability.

SB559 narrowly passed the N.C. Senate and stalled in the House for over a month. This deceptive bill would allow Duke Energy to raise your electric rates more easily, with fewer public hearings and less oversight by the North Carolina Utilities Commission by streamlining regulatory review and allowing electric monopolies like Duke to get a single approval for up to five years of automatic rate hikes for investments like its flawed $13 billion grid “modernization” scheme. It could also put Duke’s ratepayers on the hook for coal ash cleanup costs, all with little transparency or accountability.